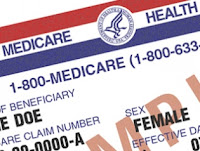 One of the ideas thrown around to save Medicare costs is to increase the age of eligibility from 65 to 67 (Social Security is undergoing a slow transition from 65 to 67, initiated by Congress in 1983). It seems to make sense: people live & work longer, so let's adapt and save some money.

But it looks like it wouldn't help very much.

These numbers below are from a 2011 analysis by the Kaiser Family Foundation I recently reviewed for journal club. For more (but not too much) detail, there's a great Executive Summary on page 5.

If the age change suddenly went into effect in 2014, this is what would happen in the first year:

A word on their methodology: they make 2 useful assumptions. First, that the ACA stays in force as currently enacted, and implemented as expected (for simplicity, they assume every state expands Medicaid as directed by the ACA). Second, they assume an abrupt increase in the age of Medicare eligibility to 67 (if it were enacted, it would most likely be phased in gradually over at least a few years).

One other point I will add here is that while life expectancy has certainly gone up since Medicare's inception, a lot of that increase is because fewer people die as infants and children. It's not like everyone used to die at age 65 and now everyone dies at age 78 -- many/most of those who made it out of early childhood a century ago lived into their 70s, and many of the big improvements in population health has been in stopping those early childhood deaths (bringing up the overall average).

What if the ACA is repealed? The fed will save a bunch more money -- very roughly, I would estimate $20 billion based on these numbers.** So let's call that 4% of total Medicaid costs saved. But in the absence of the ACA, the 65-66 year olds would only have 3 options for insurance:
And a lot of them wouldn't be able to get affordable insurance on the individual market -- without the ACA guaranteed issue regardless of preexisting conditions, and the other premium control mechanisms and subsidies, many 65-66 year olds find it basically impossible to get coverage.

So yes, Medicare is costs a lot. And we need to reign in costs. But increasing the age of eligibility 2 years looks like it will only shave 1% off of Medicare costs, while shifting a huge burden onto individuals, employers, and states.

NB This post refers to the US Medicare program -- government health insurance for the elderly & disabled.

*nothing below this point is from the KFF paper