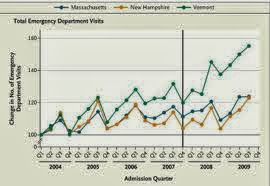 Open enrollment for the ACA exchanges starts on October 1. As more Americans get health insurance, what will happen to ED visits? What happened when Massachusetts enacted similar reform?

Like many Republicans in Congress, orthopedic surgeon and Wyoming Senator John Barrasso is an outspoken critic of the Affordable Care Act. I’ve seen him speak twice – first when he was an invited speaker at the 2012 ACEP Leadership and Advocacy Conference, and again this winter when we brought our residents to Congress on our annual Capitol Hill Day. Both times, he predicted that ObamaCare would increase ED visits; after all, ED visits increased in Massachusetts after the state enacted health reform in 2006

Senator Barrasso is not the only one who makes this connection. It’s a claim repeated by Avik Roy, one of Mitt Romney’s key health care advisors,1 as well as John Goodman, who the Wall Street Journal calls “the father of HSAs”2 (not the actor). Journalists repeat the same argument: “In the wake of the Bay State’s 2006 health care overhaul, which provided the model for ObamaCare, emergency room visits soared”3 and “emergency department visits will rise with health reform, just as they did in Massachusetts after the state enacted a health reform law in 2006.”4

Prominent emergency physicians have recognized the trend as well. Referring to a 2011 poll of emergency physicians, then-ACEP president Sandra Schneider, stated: “This poll confirms what we are witnessing in Massachusetts — that visits to emergency rooms are going to increase across the country, despite health care reform, and that health insurance coverage does not guarantee access to medical care.”5

The argument makes some intuitive sense. As some people gain health insurance coverage, they will have one less barrier to going to the ED, driving up visits. And similar to the Affordable Care Act, Massachusetts' reform focused on covering the uninsured but did little to increase primary care, so of course they will come to us.

Many attribute this increase to health reform. But ED visits have been increasing everywhere. According to numbers from the CDC's National Center for Health Statistics, there were 119 million ED visits in 20068 and 136 million in 2009,9 an increase of 14% nationwide. While total ED visits went up in Massachusetts, they increased less than they did across the country. In fact, when looking not at total ED volume but the per capita ED visit rate, after holding steady for a few years, by 2010 individuals in Massachusetts were actually less likely to go to an ED.10

A New England Journal of Medicine study compared ED visit rates across the same time period between Massachusetts and two neighboring states, neither of which implemented any state-level health reform.6 New Hampshire and Vermont saw nearly identical increases in ED visits over the same time period, too. Looking just at ED visits that led to admissions, the numbers look the same, implying the acuity levels were comparable in Massachusetts and its non-reform neighbors. Other studies have found that the “increase” in Massachusetts ED volumes after reform was not from low acuity or non-emergency visits.11,12

Of course there are differences between Massachusetts and the country as a whole. The health care environment in Massachusetts is different than in the US, both before and after reform. For starters, state health reform decreased Massachusetts’s uninsured rate from only 10.9% in 2006 to 6.3% by 2009, compared to the >17% national uninsurance.13 And the ACA is not identical to Massachusetts’ reform.

Surprisingly, there was a twitter conversation about PE workup. Here is my PE algorithm. Most of you will recognize most of it.

Additionally, an incredibly similar path was articulated very well by Jeff Tabas on the June 2013 EM:RAP.

If you do it right, you should never be angry at a positve d-dimer. 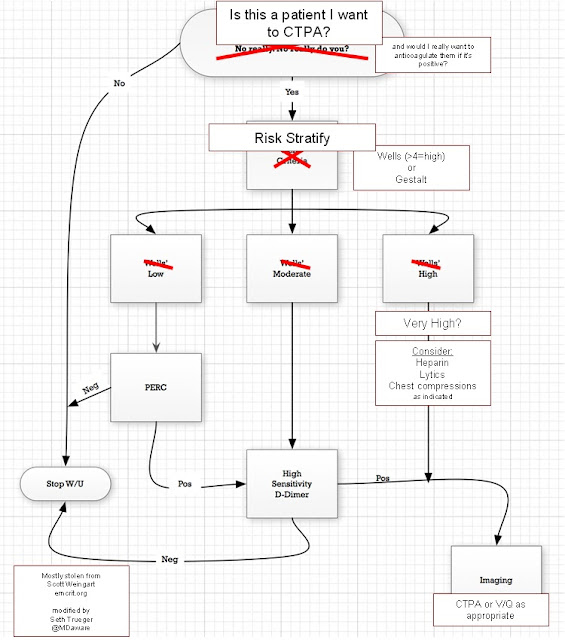