I've been trying to find this paper for a while, finally was able to. I saw Judd Hollander quote it in a grand rounds as PGY2:

Tools of the Trade

"What do you carry with you on shift?"

This question has come up a few times, so I figured I'd put it down in one place:

Rear pocket:
2 sheets of paper, folded in quarters for signout, notes, etc. I print out the track board intermittently and put some brief notations
iPhone (not pictured, because it's taking the picture; usually in breast pocket these days) 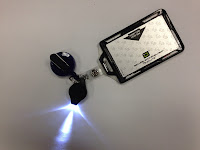 ID:
mini-LED (like these) so I always have a light without ever needing to think about it
retractable reel clip 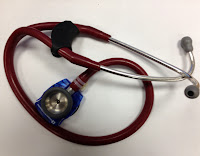 Desk:
stethoscope; still useful in a handful of situations, mostly wheezing, reiki, and leading into questions about smoking 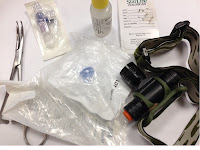 Glossary Term: Not Looking So Hot...

(2) the morphotype of the same

The patient has crackophrenia hair.

Special thanks to Scott Goldberg

With all due respect to Darren Braude (who is both smarter and significantly more qualified than me!) I'm admittedly not a huge fan of RSA -- rapid sequence airway. The concept is simple: give RSI meds (sedative + paralytic), place EGA* to preoxygenate, then intubate. The main concern I have is that you are taking patients who already think there might be an issue in oxygenating, and paralyzing them. Not much of a safety net.

However, the main reason I don't like RSA isn't because RSA is terrible or wrong but because the patients who need RSA are sick, tricky patients and all paths are fraught with danger.

There's been an twitter discussion over the past day or so between Nicholas Chrimes, Minh Le Cong, myself, and few others (Pik Mukherji, Alexander Sammel, Taylor, Brent May, Alan Grayson, Crystal Upshaw, Chris Edwards, Valerio Pisano, Kath Woolfield... sorry if I missed anyone!). And sometimes 140 characters (plus all the @tags taking up space) just isn't enough.

The main discussion skeptic of RSA here is Nicholas Chrimes, who asks:


Why not just try to intubate these patients? If they desat or the airway is unexpectedly difficult, then place an EGA and reoxygenate.

And I want to be very specific: I mean the patient who is preoxygenated to 100% on NIV for 3 minutes with 10 of PEEP and by the time the spatula hits the glossus, the sat is 85%. Doesn't happen much but when it does, no one is happy.

I think that the best thing you can do with this patient is slip in an LMA, reoxygenate, then intubate via the LMA. Dr. Chrimes disagrees, for a few reasons.

First, he contends that an attempt at ETI is just as fast as LMA placement. I disagree. I think that in the time it takes me to get the blade in the mouth, I could already have the LMA in place and start reoxygenating. I haven't done a formal lit search on this but in addition to my experience, there is at least one paper that at least suggests it (PMID 22796543**).


“It's not about plastic in the trachea, it's about oxygen in the lungs." (Rich Levitan)

Sure, there is a risk for aspiration. But if the patient is desaturating precipitously, then the risk for hypoxia is much higher than it usually is. Here RSA is used to avoid hypoxia -- which you know will be a problem, while aspiration only might be a problem.

I don't think the answer is necessarily clear. But to me, this seems like the least dangerous path in a very dangerous patient.

As the twitter argument conversation continues, something I realized I forgot to include:

Part of Nic's contention is that ETI is just as fast as LMA placement. Again, I disagree. In fact, to me, part of the reason RSA makes so much sense here is that while you may not have enough time to intubate the patient before a critical desaturation, you very well might have time to slip in an LMA. After rexoygenating, you can then intubate through the LMA, which should also take less time than a laryngoscopy & tube placement attempt.

Basically, you're breaking up your intubation attempt with the LMA, and adding a chance for the patient to catch their breath.

Plus, attempting to intubate via an LMA has an added benefit: if you need to bag the patient back up, the time it takes to abandon your attempt and start ventilating is very short -- certainly shorter than backing out from an attempt at ETI and going back to bagging. And, now you're LM bagging, which is often better than FM bagging.

*Extra glottic airway, such as a laryngeal mask or King-LT. I happen to prefer LMAs -- and I know that technically LMA is a brand name but I don't want to keep typing "laryngeal mask"

**I happen to have been a subject in this study
Posted by mdaware 2 comments: