UPDATE 9/28/15:
This story NYTimes Well story that instructs laypeople how to perform table-side crics to choking restaurant visitors has, not surprisingly, gotten a bit of play, including a nice Letter to the Editor response from ACEP President Michael Gerardi.

One point that has been nagging me, however. I'm honestly not that concerned about an untrained layperson slicing the carotid of choking patient who failed Heimlich was going to die anyway in a last-ditch attempt to save them. They were going to die anyway, might help.

BUT my big concern is who the untrained layperson attempts to cric. I don't want a patient who just needed a good abdominal thump to instead gets a botched cric.

One of the big cliches in emergency airway teaching is "the most difficult part of performing a emergency cricothyroidotomy is the decision to proceed" -- the Times should not advocate untrained diners make that decision.

The Heimlich maneuver doesn't always work, maybe it's not such a a good idea for NYTimes Well to recommend this:


When all attempts to rescue a choking victim fail and emergency medical help is unavailable, there is a treatment of last resort: a cricothyrotomy, which is easier and quicker to perform than a tracheotomy. With the victim lying flat, tip the head back and locate the bulge of the Adam’s apple. Using a sharp knife, make a half-inch horizontal cut a half-inch deep between the Adam’s apple and the bulge an inch below it, the cricoid cartilage. Insert something like a straw or casing of a ballpoint pen (first remove the ink cartridge) and breathe into it. In case someone’s life depends on your ability to do this, review an illustrated description of the procedure at www.tracheostomy.com/resources/surgery/emergency.htm.

Upside: perhaps I will pay off my student loans selling my new poster to restaurants: 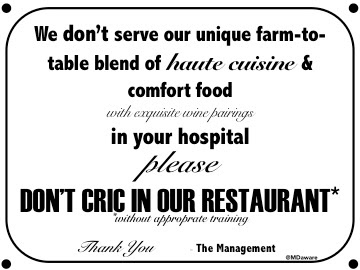 Special thanks to Alex Koyfman for inviting me to write an EM Mindset essay, Alex and Manpreet Singh for editing & posting it, and Reuben Strayer for the referral.

@EMManchester @emdocsdotnet I am struggling with @MDaware "if you do one test, then you can do 5..." Troubles me as a Ix minimalist ?costs?
— Casey Parker (@broomedocs) September 7, 2015


@MDaware I just want to know how I can work in this magical place where hospitalists take pts with labs still pending...
— Jordan Schooler (@JBSchooler) September 7, 2015